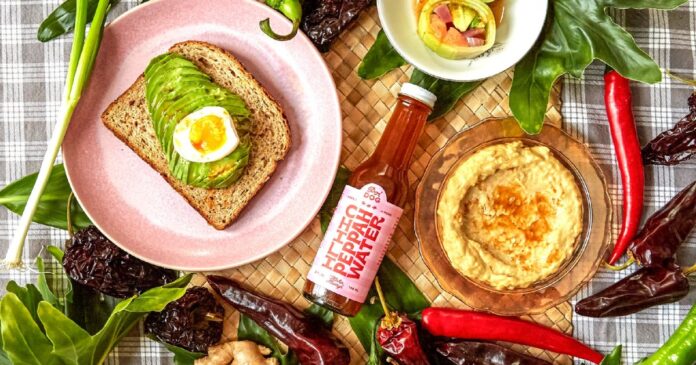 Ketchup and mustard, mayo and sriracha, you’re safe. This isn’t an eviction notice to the classics—just a request to make some room in the fridge and cabinet as chefs, farmers, and food artisans expand America’s roster of essential condiments at a delirious, delicious pace. Here are seven of the most action-packed condiments to teach an old dog (burger, drumstick, taco, pizza slice, etc.) new tricks.

At her Hawaii-inspired restaurant, Poi Dog, Kiki Aranita would serve nori-speckled fried chicken with this thick, burgundy sauce, which draws its tangy sweetness from guava. Poi Dog, a pandemic victim, is now a bottled sauce line, and the katsu is Aranita’s latest product. It’s fantastic with fried chicken, for sure, but also dabbed on burgers and dolloped on fried rice. Other standouts include Chili Peppah Water and Maui Lavender Ponzu (shop the set for.

Philly chef Chris Paul describes epis—omnipresent in island kitchens—as the Haitian equivalent of chimichurri. Green, herbaceous, sharp and spicy, it can be deployed as a marinade, as per Paul’s otherworldly Haitian grilled chicken. Equally delicious: using it as a brightening condiment after cooking.

Yeah, we know, this herb’s about as polarizing as it gets. But for members of Team Cilantro, the verdant kick in this vinegary, slightly buttery hot sauce from the Jersey Shore is everything a dedicated corianderite could hope for. Cilanktro livens up eggs and pizza, and is a bold choice for homemade Buffalo wings.

A Southern Italian heirloom brought to Connecticut in the late 1800s, the Jimmy Nardello chile is sweet, thin-skinned, and a favorite of chefs and farmers like Zaid and Haifa Kurdieh. The couple teamed up with New York’s Burlap & Barrel spice company to dry and jar their Nardellos. Here’s the phenomenal result—the only bottle of sweet-not-hot pepper flakes your pizza and pasta will ever need.

David Chang has been retailing sauces from his Momofuku empire for years. Chili Crunch is the latest—a take on the Chinese staple (and textural dynamo) involving Mexican chiles, fried garlic and shallots, sesame seeds, shiitake powder, and other umami carriers, all joined in oil. Spoon it liberally over ramen, omelets, and tacos.

If you only reach for the Worcestershire when it’s time to make Caesar dressing or a steak marinade, it’s time to trade out that old Lea & Perrins for Keepwell’s vivacious small-batch version. Sorghum molasses, persimmons, fermented oysters, and spicebush berries lend a mid-Atlantic terroir. You’ll find yourself using it to anoint rich soups, hearty braises, and micheladas—really anything that calls for a three-in-one dose of umami, acid, and salinity.

Vermont may be maple country, but very few New England farms also tap birch trees. Abby and Trent Roleau’s Gateway Farm in Bristol is one, harvesting birch sap and boiling it down into a ruddy syrup with whip-crack acidity. It’s as dynamic drizzled over aged cheddar and roasted squash as it is over cast-iron pancakes and vanilla ice cream.

How to Build Big Biceps at Home (NEVER DO THIS!!)

Is Jeff Cavaliere/AthleanX REALLY 5.3% Body Fat? What I Think of...

What I Eat In A Day During UK Lockdown | Healthy...

Glute Medius – The Weakest Muscle in Your Lower Body!